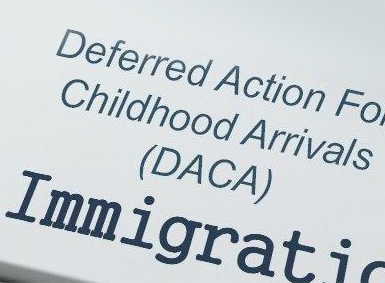 What is Deferred Action for Childhood Arrivals (DACA)?

On June 15, 2012, the U.S. government announced that certain people who came to the United States at a young age and meet certain criteria may request consideration of deferred action for a period of two years, subject to renewal. They are also eligible for work authorization. Deferred action is a form of prosecutorial discretion to defer removal action against an individual for a certain period of time.

The candidates for Deferred Action under this program are sometimes referred to as “DREAMers” named after the proposed Development, Relief, and Education for Alien Minor (DREAM) Act that has been pending in Congress for many years but never passed by both the House and the Senate. At Valverde Law we believe in the DREAM and in DREAMERS and support Congressional initiatives that provide a permanent status for Dreamers and those eligible for DACA.

On December 4, 2020, a federal court ordered USCIS to accept not just renewal applications but also those applying for DACA for the first time.  Contact us to find out if you qualify to apply for DACA or to schedule an appointment to speak with an immigration attorney.

Who can apply for Deferred Action for Childhood Arrivals (DACA)?

Due to a federal court order, U.S. Citizenship and Immigration Services (USCIS) is now accepting applications from those who are applying for DACA for the first time and those renewing their Deferred Action for Childhood Arrivals (DACA) status.

To qualify for DACA initially, according to USCIS applicants must have met the following criteria:

• Came to the United States before reaching their 16th birthday;

• At least 15 years old at the time of application, unless subject to removal proceedings, a removal order, or an order of voluntary departure;

• Have continuously resided in the United States since June 15, 2007, up to the present time;

• Were physically present in the United States on June 15, 2012, and at the time of making the request for deferred action;

• Were in school, have graduated or obtained a certificate of completion from high school, have obtained a general education development (GED) certificate, or were an honorably discharged veteran of the Coast Guard or Armed Forces of the United States; and

• Have not been convicted of a felony, significant misdemeanor, three or more other misdemeanors, and do not otherwise pose a threat to national security or public safety.

Can I travel outside the U.S. with DACA?

Due to a court order, U.S. Citizen and Immigration Services (USCIS) has resumed issuing advance parole documents or travel permits to DACA recipients.  Those with DACA should not leave the U.S. unless they have an approved advance parole and after consultation with an immigration attorney

Can I get a green card with DACA?

Contact us to find out if you qualify to apply for DACA or to schedule an appointment to speak with an immigration attorney.