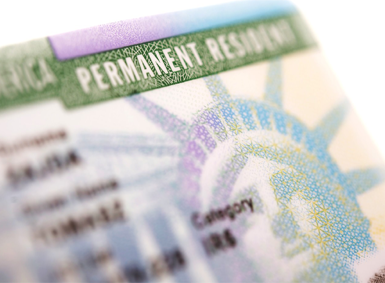 Am I eligible for Adjustment of Status to obtain my green card in the United States and get a green card through my marriage to a U.S. citizen?

If you are married to a U.S. citizen you are considered to be an immediate relative under U.S. immigration laws. As an immediate relative, of a U.S. citizen you can apply for your green card based on your marriage if you entered the U.S. lawfully. When you apply for the green card based on your marriage in the United States, this is called Adjustment of Status. Applying for Adjustment of Status involves submitting an I-485 application with supporting forms, documents and evidence to U.S. Citizenship and Immigration Services.

Can I get a work permit when I apply for a green card based on my marriage to a U.S. citizen?

When will I get a social security number?

Can I travel outside the United States after I file my application for Adjustment of Status?

When you submit the Adjustment of Status application you can also file an I-131 for a travel permit known as an Advance Parole document. Please note that if you travel outside the U.S. without the travel permit your application will be considered abandoned and you may not be allowed to reenter the United States. There also may be risks associated with traveling abroad while the application is pending for which an immigration lawyer should be consulted.

How can I obtain lawful permanent residence based on my marriage to a U.S. citizen if I am outside the U.S.?

If you are married to a U.S. citizen but are outside the U.S., you can still obtain your green card. The process involves two steps. First, the U.S. citizen must file an I-130 Petition with U.S. Citizenship and Immigration Services with supporting forms, documents and evidence. Once U.S. Citizenship and Immigration Services approves the Petition, it forwards the Petition to the Department of State's National Visa Center.

The foreign spouse must then attend the interview. If the U.S. embassy approves the immigrant visa, it will place the visa stamp in her passport which can be used to enter the United States as a lawful permanent resident. After paying an additional fee to U.S. citizenship and Immigration services known as the immigrant fee, it will send the green card in the mail.

Can my children also apply for a green card based on my marriage to a U.S. citizen?

Yes, the unmarried children under 21 years of age of the foreign spouse can also file for a green card as long as the child was under 18 when the marriage occurred.