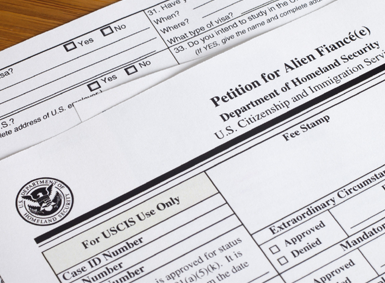 Who is eligible for a fiancé K-1 visa?

How do I apply for a fiancé K-1 visa?

Applying for a fiancé K-1 visa is a two step process. A U.S. citizen may bring their foreign fiancé to the United States to get married by first filing an I-129F Petition for Alien Fiancé with U.S. Citizenship and Immigration Services.

The Petition must include evidence that the U.S. citizen and the foreign fiancé intend to marry each other within 90 days of the fiancé entering the U.S. In addition, documentary evidence must also be provided that the couple has met in person in the last two years before filing the Petition, unless a waiver is granted. Further, evidence must be provided that both parties are legally eligible to marry and that there is a bona fide relationship, meaning both have an intent to establish a life together and not for the sole purpose of obtaining a immigration benefit.

In the second step, after U.S. Citizenship and Immigration Services approves the Petition it will forward the Petition to the National Visa Center which will send it to the appropriate U.S. embassy. A consular case will be created with a unique case number. The foreign fiancé must then file a visa application, pay the consular fees, obtain a medical exam, and collect the appropriate documents to schedule the visa interview.

If the U.S. embassy approves the fiancé K-1 visa, it will return the foreign fiancé visa's passport containing the visa which can be used to travel to the U.S. Once in the U.S. the U.S. citizen and fiancé must marry within 90 days. After the marriage, we recommend filing the I-485 adjustment of status application for the green card right away, which includes an application for an employment authorization document and advance parole document to allow travel outside the U.S. while the adjustment application is pending.

Am I eligible to work with a fiancé K-1 visa?

Yes, the fiancé K-1 visa holder can apply for an employment authorization document by filing a I-765 application. However, it is usually best to file the adjustment of status application for the green card or lawful permanent residence as soon as the couple is married to avoid having to pay more government fees than is necessary. The adjustment of status application filing fee includes the employment authorization document as well as an advance parole to allow travel outside the U.S. while the application is pending.

Can the children of the fiancé come to the United States?