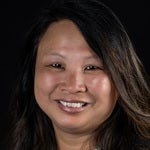 Born in the Philippines, Lychelle immigrated with her family to the United States as a toddler. Her mom later joined the U.S. Army and Lychelle experienced many moves and transitions during her childhood. Accustomed to the military lifestyle, Lychelle commissioned into the US Army after college.  She proudly served as a communications officer and retired in 2015.

Lychelle gained a unique appreciation for diversity in all aspects of life.  Both as a military child and as an active duty soldier herself, Lychelle traveled extensively.  She has lived or worked in multiple countries, including Afghanistan, Egypt, Germany, Israel, Kuwait, the Republic of Korea, and the Philippines, as well as in a host of states across the U.S.  These experiences have afforded Lychelle the opportunity to meet people from different lifestyles and cultures.  While she misses the camaraderie and interaction with people of diverse backgrounds in the military, practicing in immigration law has filled that void.

Lychelle respects and values her service to those from across the globe.  She enjoys interacting with her clients and genuinely cares about the results for each and every one.  She is compassionate and honest and has a way of getting people to open up.  As your attorney, she will be responsive and maintain open lines of communication.

Lychelle loves to travel but nothing captures her heart like her children.  She is a proud mom of four and her favorite times are spent hanging out with family.  Outside of the office, Lychelleis cheering her children on at their soccer games, basketball games, track meets, and fashion shows.