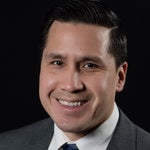 Hugo's passion for immigration law stems from his own family's immigration experience. His father and mother came to the United States from Peru fleeing political persecution, and as he grew up, Hugo spent many summers in Peru. Hugo uses his experience growing up in an immigrant family and time abroad to understand the conditions where his clients or their employees may have come from and the challenges they face when they come to the United States. He uses this understanding to provide better service to his clients.

Hugo is a firm believer that immigrants make America great! He has served the immigrant community through the practice of law since 2005. He managed the successful law firm of Valverde & Rowell P.C. for more than 12 years and recently in 2019 started Valverde Law, a law practice dedicated exclusively to immigration law.

Hugo loves to teach and share his passion for immigration law. He has taught immigration law at Regent University School of Law since 2009. He also teaches an immigration law practicum at Regent, allowing law students to provide needed legal services to asylees, victims of crime, domestic violence and human trafficking.

Hugo served as an attorney advisor to the Immigration Courts in Oakdale and New Orleans, Louisiana, and Memphis, Tennessee. The U.S. Department of Justice, Executive Office for Immigration Review selected him for this position under the highly competitive U.S. Attorney General's Honors Program. As a law student, he volunteered with the local office of the Diocese of Richmond's Catholic Refugee and Immigration Services.

Hugo graduated with honors from Regent University School of Law in Virginia Beach, where he served as a senior editor of the Regent University Law Review. Prior to attending law school, he earned a master's degree in environmental management from Duke University and a Bachelor of Science degree from the College of William and Mary. Hugo has published articles in the Journal of Coastal Research and the Journal of Coastal Management.

In the past, he served as co-chair of the Immigrant Outreach Committee of the Virginia State Bar Young Lawyers Conference and a legal advisor to the Illegal Immigration and Crimes Task Force of the Virginia Crimes Commission. In 2008, Hugo received the R. Edwin Burnette Jr. Young Lawyer of the Year Award from the Virginia State Bar Young Lawyers Conference. . Before attending law school, Hugo worked for several years as an environmental planner with the Hampton Roads Planning District Commission. At the Commission, he represented local governments on state advisory committees, analyzed the impact of proposed federal and state regulations on local governments, and assisted the local governments of Hampton Roads develop municipal and construction stormwater runoff programs and Chesapeake Bay Preservation Act programs that complied with federal and state environmental laws.

Hugo is admitted to practice law in Virginia but serves clients with immigration law matters nationwide. He is a member of the American Immigration Lawyers Association.

Hugo is proud to call Virginia Beach home where he enjoys spending time with his wife and five children, surfing, and playing and watching soccer.