The Arlington Immigration Court is Moving 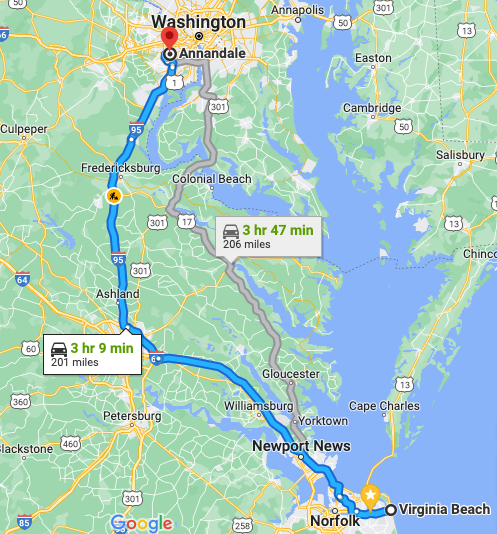 Map of Virginia Beach to Annandale

Remember that immigration backlog we keep telling you about?

In 2019 the immigration court in Arlington, Virginia had the third largest backlog of immigration cases in the United States. Today, in 2022, all signs point to that backlog only having grown worse. Nationally, the immigration court backlog “now tops 1.6 million cases, up from 1.1 million before the pandemic and more than double the caseload that existed in fiscal year (FY) 2018,” according to the Migration Policy Institute.

Soon after entering office President Biden announced ambitious new immigration plans in an attempt to improve what has been criticized as an increasingly slow and burdensome system. Six months ago USCIS (United States Citizenship and Immigration Services) announced new reduced cycle time goals, and the Department of Justice (DoJ), which oversees immigration courts, asked in its 2022 fiscal year request for an additional $177.5 million in immigration-related program enhancements, specifically for the hiring of an additional 600 immigration judges and support staff.

As part of the new immigration court structure in Virginia, the Arlington Immigration Court will close, and end normal operations at noon on October 6, 2022. All hearings after October 5 will instead take place at the Annandale Immigration Court. The Executive Office for Immigration Review (EOIR) will notify parties whose cases are affected.

We  are hopeful that this new immigration court structure will reduce the backlog that has plagued our state.

Does this Mean that My Immigration Case Will be Transferred to the New Courts?

Yes. EOIR is in the midst of sending official notification of a change of hearing location to all parties whose cases are reassigned to the new court (Sterling) or the replacement court (Annandale), but most people who previously had hearings scheduled at the Arlington Immigration Court will now have them heard at the Annandale Immigration Court. If you have questions about cases assigned to the Sterling Immigration Court please call EOIR staff at 703-674-4600. If you have questions about cases rescheduled to the Annandale Immigration Court you can call their staff at 703-343-4000. If we are currently representing you in your immigration court hearings, you can also reach out to our office at 757-422-8472.

Sterling is six minutes away from Dulles International Airport, and is located just a half hour from the current immigration court in Arlington. The actual courthouse will be located at

about three and a half hours from Virginia Beach.

Annandale is about 20 minutes' drive away from the closing immigration courthouse in Arlington, and just over three hours away from Virginia Beach. It is located at